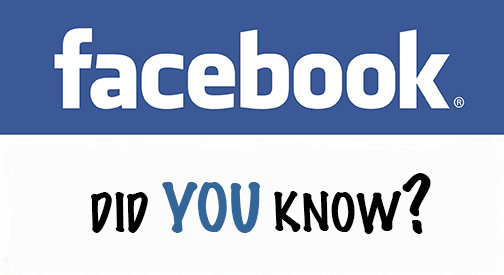 Did you know, in order for people to actually see your posts these days, Facebook is forcing you to pay for visibility?

Doesn’t that seem rather odd? Being that people have basically opted to follow your business page by casting their vote and hitting the “LIKE” button, wouldn’t it make sense when you create a new post, your followers would see it?

Well, it doesn’t work that way anymore. Today if you want more eyes on your posts, you will have to pay for it! (and dearly I might add!)

In the example below it will cost you $100 to reach an estimated 12,000 -33,000 people based on the interest or keywords you have chosen. Seems like a lot of money for little reach on a platform that has over 1 billion users. 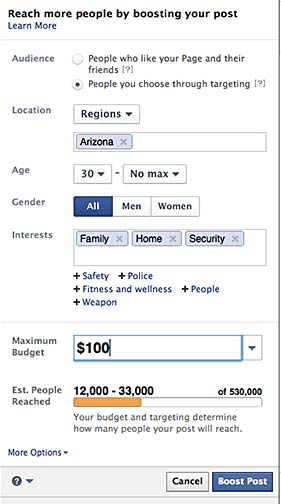 I came across an execllent article from Derek Muller of Veritasium,  check out his video below in what he calls “The Problem With Facebook”  and why boost promoting your Facebook page or post is a waste of money!

If you really want to know how to waste money on Facebook advertising, Check out Derek’s video on Facebook Fraud which talks about promoting your page for more “LIKES” below. It will make you sick!

Okay so back in June of 2013, when Facebook wasn’t quite as greedy as it is today, in the post below you can see that 35 people organically viewed the post. 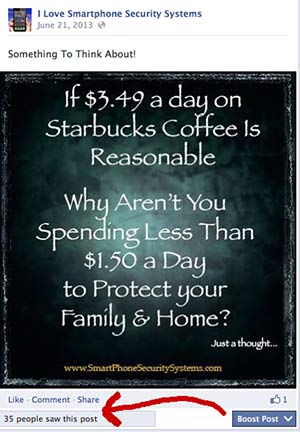 Fast forward to April of 2014, I decided to run a test to see if using the boost post feature on Facebook would be worth the money spent.

Via another marketing campaign I am using, I created a few different coupon offers to share on my business page. As you can see below, the coupon for a free smoke detector without paying to boost the post was only viewed by 8 people. Pretty sad don’t you think? 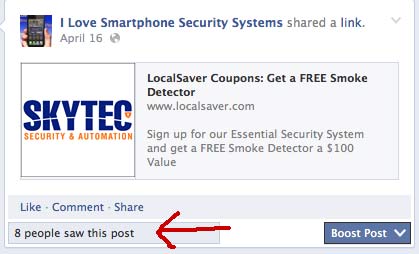 Next it was time to break out the credit card!

I decided to spend $15.00 and targeted my advertising to specific people interested in home security. The result, 7480 people saw the post. Not bad but who are these people and how engaged are they? 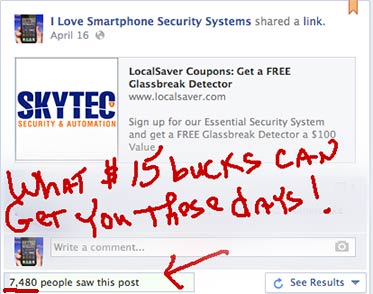 Now I must say, I’m a little miffed with Facebook’s tracking stats. As you can see, there are three different conflicting results showing.  Above, 7480 people viewed the post. The question is, of that number, how many were organic vs paid?

Simply hover over the orange bar (shown below) in the “Reach” section and it shows 209 are organic. Which means 7271 resulted in paid views… Good to know! But…

The confusion lies in the Engagement and Post Clicks… In one section it shows 42 post clicks, (at the top) and in the bar graph below, it shows only 28 post clicks. Why the difference? Same holds true for the “likes”. 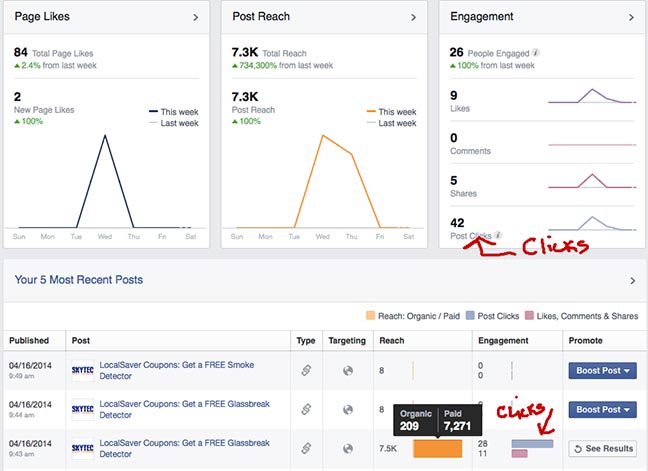 Interestingly enough, if I dig deeper in the stats and click the “See Results” I get yet a different set of numbers. 6819 paid results vs the 7271 number above, with only 13 engaged as opposed to 26 listed above. 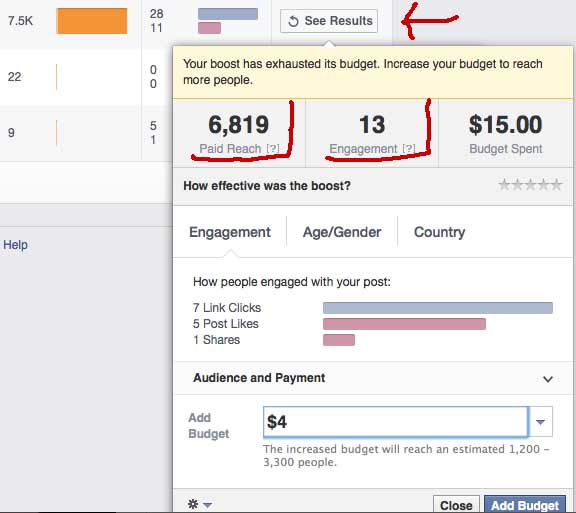 At the end of the day it really doesn’t matter why the numbers don’t match. All that matters is the ROI of the budget spent. After all,  boost promoting your Facebook page has one purpose, to generate leads and sales, right?

Well, in the end, according to Facebook’s crazy tracking methods, the long blue bar in the screen shot above shows 7 “Link Clicks”. Which breaks down to $2.14 per click, not my idea of cost effective pay per click advertising!

Honestly, I’m still scratching my head trying to figure out the difference between Link Clicks and Post Clicks. If I paid to boost promote my coupon, and someone clicked on the coupon (post), that is a direct link to my ad.

How does Facebook figure I only had 7 link clicks when in the screen shots above they list 28 or 42 post clicks, depending on which stat you choose to believe!

I would feel a heck of lot better if the real number is 42 clicks, that would bring down my CPC to .36 cents. Even at 28 clicks, the CPC would be only .54 cents. Those are numbers I can live with.

So what are your thoughts? Is boost promoting your Facebook page or post a complete waste of advertising money?

If its still not clear, watch Derek’s video below on paying to promote your Facebook Page. You will be shocked to learn how many fake likes you are paying for!

There are plenty of courses on How to Promote Your Page on Facebook that will teach you how to get as little as 3 cent clicks. But after viewing Derek’s videos, I have to wonder if paying and promoting your Facebook Page for Business is worth the time and money spent.

Instead of  dealing with high Facebook advertising costs, in an upcoming article we will examine the possibility of  promoting your Facebook page using the Tribe method. Check back soon! 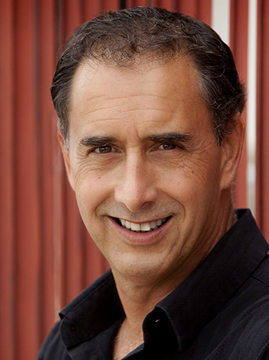 Tell us about your successes or failures on this topic in the comment box below. I would love to know if boost promoting your Facebook page has paid off for you. 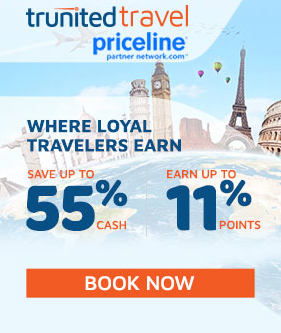